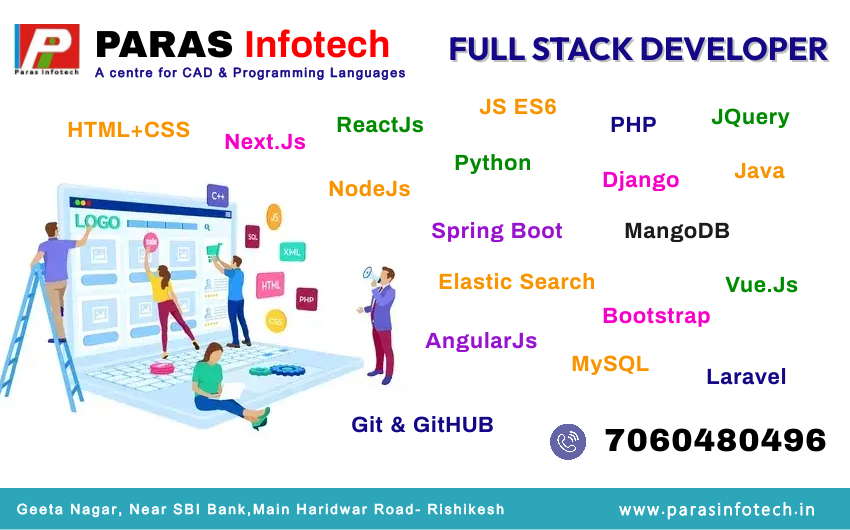 Everything on a web page from the logo, to the search bar, buttons, overall layout and how the user interacts with the page was created by a front end developer. Front end developers are in charge of the look and feel of the website.

Front end developers also have to make sure the website looks good on all devices (phones, tablets, and computer screens). This is called Responsive Web Design.

Back end Development (Server side)

Back end development refers to the part of the application that the user does not see. Back end developers focus on the logic of the site, creating servers, and working with databases and API's (Application Programming Interfaces).

For example, the content and layout for a form would be created on the client side, but when the users submits their information it gets processed on the server side (back end).

HTML stands for HyperText Markup Language. HTML displays the content on the page like buttons, links, headings, paragraphs, and lists.

CSS stands for Cascading Style Sheets. CSS is responsible for the style of your web page including colors, layouts, and animations.

React is a JavaScript-based UI development library. Facebook and an open-source developer community run it. Although React is a library rather than a language, it is widely used in web development

AngularJS is a client side JavaScript MVC framework to develop a dynamic web application. AngularJS was originally started as a project in Google but now, it is open source framework.

AngularJS is entirely based on HTML and JavaScript, so there is no need to learn another syntax or language.

Node.js is an open source, cross-platform runtime environment for developing server-side and networking applications. Node.js applications are written in JavaScript, and can be run within the Node.js runtime on OS X, Microsoft Windows, and Linux.

VueJS is an open source progressive JavaScript framework used to develop interactive web interfaces. It is one of the famous frameworks used to simplify web development. VueJS focusses on the view layer. It can be easily integrated into big projects for front-end development without any issues.

It is important for a full stack developer to know how to work with databases. A database in a web application is a place to store and organize your project's data.

SQL is a database computer language designed for the retrieval and management of data in a relational database. SQL stands for Structured Query Language

MySQL is a relational database management system based on the Structured Query Language, which is the popular language for accessing and managing the records in the database.

MongoDB is an open-source document database and leading NoSQL database. MongoDB is written in C++. This tutorial will give you great understanding on MongoDB concepts needed to create and deploy a highly scalable and performance-oriented database.

Languages you can use for back end development include Java, Python, Node, and PHP. It is not necessary to learn all of these languages, but instead focus on one to get started.

Django is a high-level Python web framework that enables rapid development of secure and maintainable websites. Built by experienced developers, Django takes care of much of the hassle of web development, so you can focus on writing your app without needing to reinvent the wheel. It is free and open source, has a thriving and active community, great documentation, and many options for free and paid-for support.

Laravel is an open-source PHP framework, which is robust and easy to understand. It follows a model-view-controller design pattern. Laravel reuses the existing components of different frameworks which helps in creating a web application. The web application thus designed is more structured and pragmatic.

A Spring MVC is a Java framework which is used to build web applications. It follows the Model-View-Controller design pattern. It implements all the basic features of a core spring framework like Inversion of Control, Dependency Injection.

Spring Boot is an open source, microservice-based Java web framework. The Spring Boot framework creates a fully production-ready environment that is completely configurable using its prebuilt code within its codebase